Phase 1 of my adult life began at an Americorps program in Austin, TX. This would prove to be the toughest, most life changing 9 months of my life. The experience opened my eyes to a whole different side of America that up until that moment I had been privileged enough or perhaps sheltered enough to not know existed, depending on how you flip the coin. I have learned that sheltering and privilege are part of the very reason why these social justice problems still exist in our country. If the more privileged classes pretend social problems do not exist and that equality abounds or worse yet refuse to talk about or become uncomfortable when these issues are brought up change cannot happen. Unfortunately, we need those people to take a stand and create an uproar. We all know money is power and without it it can be very hard to draw enough attention and awareness to a problem to even begin to make a change. Too often in our country the people going through the worst social ills do not have the power, resources or time to make the change without someone helping them out and bringing greater attention to the issues. For me Austin would be my eye opener to just how much needed to be changed in our American society. It was also the first place where I experienced what I perceived as personal failure, burnout and began to really question who I was and what I was doing.

In Austin I worked for an incredible non-profit called, A Community for Education, now known as Literacy First. I was a kindergarten classroom assistant and reading and writing tutor for 8 struggling kindergartners in the 2 English speaking classrooms at my school. I learned how to teach reading, writing and phonics and met some incredible children that I still think fondly about today and wonder where they are and what they are doing. The part that no training could have taught a girl “fresh off the boat” from Boulder, CO was the social injustices that were everywhere.

I grew up very privileged and enjoyed that life through college, but when I took this position with Americorps in Austin it did not go over well with my dad because it paid next to nothing and was a teaching position, which to my dad is not a career that demands merit. When I accepted the position in Austin for a living stipend of $12,000 a year I was in essence cut off by my family, so here I was for the first time working full time for more than a three month period and living barely above the poverty line. This, as anyone that knows me knows, ended up being one of the best things my dad has ever done for me. Did I hate him at the time? You bet!! I hated him more by the minute some days but the lesson taught by that was worth far more than any adverse situation I endured. I knew, even in 2009, that I wanted to help people. I definitely did not know how I wanted to do that, but I knew I wanted to leave the world a better place and make a positive change. I do not believe you can actually help nor change anything  if you have never been on the other side. There are just some things you can never understand without going through it.

So here I was in a different universe from Boulder or the Northeast living quite literally in the middle of Texas in a rough neighborhood teaching impressionable children. I learned immediately that the majority of people faced problems I had not yet understood until that moment. It was not uncommon in my neighborhood to hear threats and screams on the street as I was going to sleep. My children faced social issues I could not even begin to fathom from abuse to a lack of nutritious food and or the resources to obtain it to the lack of healthcare available and accessible to a lack of supervision due to parents forced to work 3-4 jobs to keep their heads above water. I quickly learned simple things like snow or the possibility of it did not bring the joy it brought me as a child but the fear of a night spent in the cold. Some of these social problems became my own as I lived for the first time with no other safety net than that of the state and federal government.

For the first time in my life I was subjected to the disaster that is the social welfare system in this country and maybe that is part of the problem. I went 22 years barely knowing social welfare existed beyond what I learned in my sociology classes at University of Colorado and here I was figuring it all out from scratch, which is how I assume everyone finds out about it, as I never had an formal instruction on where to go if or when I was in need of assistance. I quickly learned that in order to live I would need government assistance and through my program head learned that I had to go in person once a month to the social services office, wait in line for hours, have an interview with a less than enthusiast government worker and then be judged off of the little information they collected about my job, stipend and assets. They would use this information to decide for me what the minimum amount of dollars I needed for food was a month to survive. While in this office I witnessed families that would have to do this and thought dear god there has to be a more humane way. Why do we treat the less privileged like third rate citizens in their own country, after all isn’t this the land of the free?  It really got me thinking because when I had been on the other end of things America did seem fair and free but now residing on the lower end of the spectrum I saw it was far from either of those things.

I volunteered at the Salvation Army soup kitchen and got to know some of Austin’s homeless very well. Many of them were employed and still could not afford both food and a place to sleep, which was crazy to me, how do we have jobs that do not pay enough for people to survive in one of the most developed nations in the world?! Some of the people there fit the stereotypes, but I found a large portion of them were simply down on their luck with no fallback, but the city of Austin and non-profits like the Salvation Army  to help them out. The most heart wrenching thing I witnessed was something I saw the effects of constantly at the school that I worked at.

The Salvation Army could house families together for 3 months but if the parents had not garnered employment at the end of the 3 month period Child Protection Services had to be called and the family separated. This was devastating for a variety of reasons. One being that I taught children that were part of or had been part of the child welfare system and the effects were devastating even at the young age of 5. I had a student that had been bounced from family member to the state to different family members back to the state and the psychological effects were horrendous. Another system that clearly needs work. But how do you really ever know what is best for a child.. is it as a warden of the state until a foster and/or adoptive family is found or is it with a biological family member that the child has never known but shares genetics with. It is a huge grey area and a very difficult problem to solve as there are horror stories on all sides. It is quite the impossible situation.

Teaching taught me the incredible changes you can make in a child’s life just by showing up and setting an example and being there for them. I could never have imagined how many children lack the consistency of an adult being a constant in their life and someone they can look up to. I also realized just how little five year olds know and how they genuinely need adult guidance and advice. Those primary years really are the foundation for every thing a person will learn and experience later in life. I learned that year that for every one year a child gets behind it will take them five years to catch back up . That means in the current US education system where statistically only one third of the children are on or above grade level that we as a country have a major education issue on our hand.

I ultimately chose to walk away from teaching, for a bit, after that year. I think for me at that point in my life it was just too much. I could never leave it at the school, this was the first time I experienced burnout and it has been an ongoing problem for me. I took every child’s problems home with me and that will never be a recipe for success when teaching. For me I felt I could never ever do enough, but I never forgot about that year in Austin, those children and what I learned while there. Now as I am beginning to figure out my next career move I have learned that Austin was really the start of my personal growth and learning, as well as planted the seed of what would become a passion for social justice and helping those in need.

If you are even slightly considering a career in teaching, joining Americorps or fighting the good fight I would tell you to absolutely go for it! We need all the people we can get and then some.

“The people who are crazy enough to think they can change the world are the ones who do.” 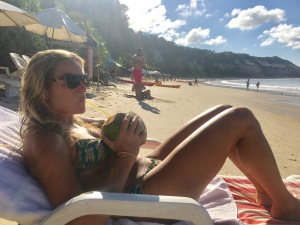 Welcome to Rolling with the Tides! I have often wished that someone would have shared their experience in all things career, life, health and wellness with me. This is my answer to that. I hope that my journey may help and inspire some of you. Enjoy!